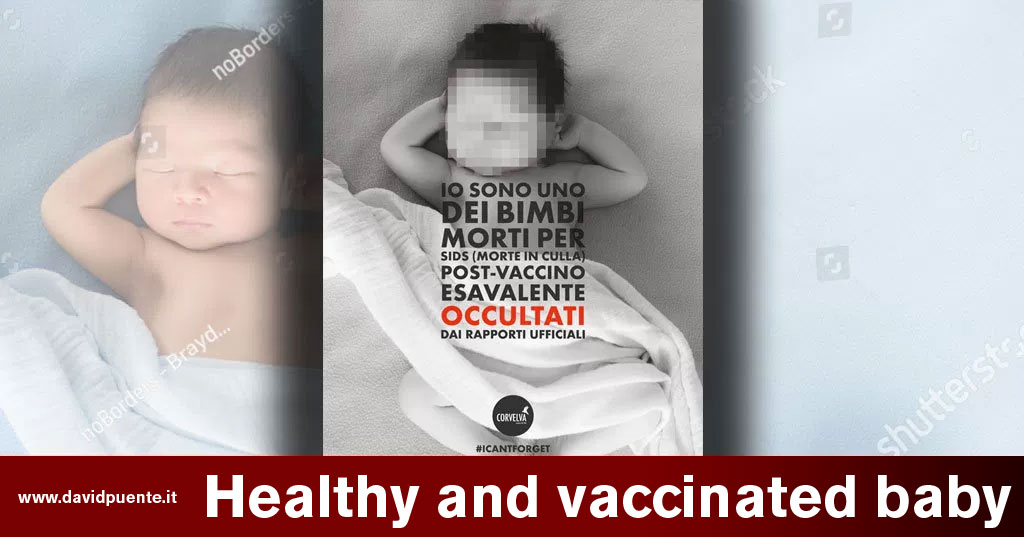 Have you seen a photo of the baby boy used by Corvelva? The one in which it states to have died due to SIDS after vaccination? As it happens the same design was used as a part of an international campaign, shared by a number of national and international organizations that question vaccination. It was translated and shared in a great number of languages, used to fear monger and promote their cause, both over social media as well in printed versions.

Well, to make things right a Facebook user named Silva used her profile to raise awareness about the improper use of the photo:

Silva shared a poster with the image in English version containing the logo of the “Vaxxed” pseudo-science peddling movie by Wakefield the quack:

It is clear and evident that the same photograph has been used internationally as a part of an international campaign promoted by antivaxx organizations.

The fact is that the photo was purchased on Shutterstock with the following description:

In Silva’s Facebook post, several persons have commented, including a person who claimed to have reported the photo’s misuse to the author of the photograph “Brayden Howie – NoBorders Photography” via Facebook, who also happens to be the baby’s father:

BH: And I can assure you the child in the image is very much alive and Well
Z: That is most important!
BH: And fully vaccinated!

For added security I also contacted the father who kindly replied and confirmed what he said to others was true. In short, the author of the photograph and infant’s father assured me that his son is alive and well, healthy and vaccinated! Contrary to what others would have you believe!

In the post thread comments and claims were made by a person called Anna, who claimed to be the designer of the poster. As those posts have been erased, I received them directly from Silva:

Anna: “Child in immage don’t have 5 years old, she/he don’t really exist. I’m a grafical design and I create by myself this pics. But the really important thing YOU have covered!!!“

Chat between user Zeljko and the designer revealed the possible breach of the terms for the licence under which the photo was purchased and the way in which it was used:

I’m asking them to remove it, and I’ll notify the stock agent so they can check. If it has benn licensed I’m certain this is outside the tems even if licensed for sensitive uses.

Shutterstock licensing agreement with clear terms what you may not use the purchased photos for:

We will see how the author of the photograph will react post fact of misuse, as the child is not dead and the photo was misused against the licencing agreement.

Message by Brayden, the child’s father:

To stop using the image and stop making false claims.

BH: Hi David. What would you like to know? Happy to provide you some additional information

DP: Thank you! Are you the child’s father?

DP: Is your son good? Is he vaccinated? What do you think about Corvelva poster?

BH: He is very well and fully vaccinated. I’m a supporter of vaccination

DP: How old is the child?

DP: Do you think the use of the photo violates the shutterstock license?

BH: Yes – it is deceptive and portrays the model as having an ailment. It is possible they have negotiated other license terms such as for sensitive use so I’ve referred it to the agent. At the end of the day it’s a legal question which I’m not in a position to judge 100% but in my opinion it violates the agreement I believe they signed up for

DP: Ok. What message do you want to give to the Corvelva association?